Historic Centre of Porto and the Luis I Bridge: The city of Porto was founded during the Roman period. Porto is located along the estuary of the Douro River. The historic centre of Porto lies on a steep, rocky hill. Prince Henry the Navigator of Portugal was born in Porto, he supported the maritime discoveries of Portugal and made it a great seafaring power in the 15th century. His body rests in the Founder's Chapel of the Monastery of Batalha. The history of Porto can be seen in the numerous monuments from the past, such as the bell tower Torre dos Clérigos, once the tallest building in Portugal. Many buildings in the historic centre of Porto are adorned with azulejos (Porteguese ceramic tiles). The most notable is the São Bento Railway Station, the building is decorated with twenty thousand azulejos, the tile panels of São Bento depict historic scenes. The 15th century Santa Clara is a church in Manueline style. The 12th century Porto Cathedral is one of the oldest monuments of the city. Porto is well known for the production of port wine. The wine grapes are grown in the vineyards of the Alto Douro. There are numerous wine cellars in Vila Nova de Gaia, a suburb of Porto. Several cellars are open to the public, it is possible to taste and purchase the port wine. The city of Porto used to play a major role in the wine trade between Great Britain and Portugal. The Historic Centre of Porto, the Luis I Bridge and Monastery of Serra do Pilar gained the status as a UNESCO World Heritage in 1996. 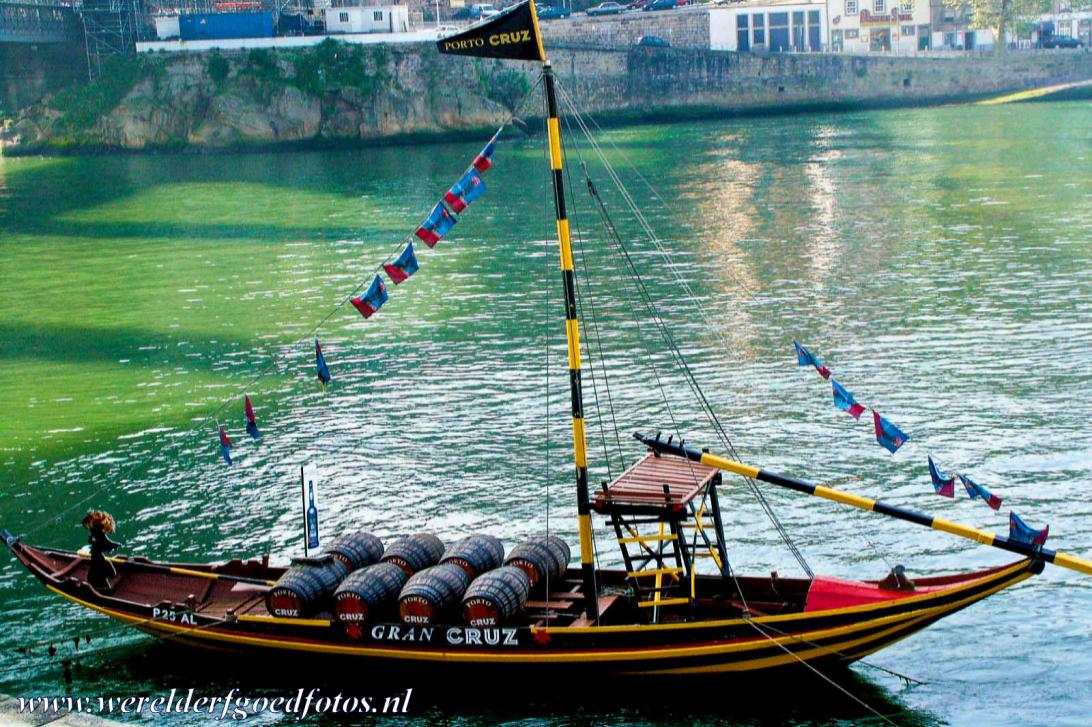 A traditional Rabelo boat on the Douro, the River of Gold, in the historic centre of Porto. The wooden Rabelo boats were used to transport the port wine from the Alto Douro wine region to Porto. Porto is situated along the estuary of the Rio Douro in Portugal. The most famous export product of Portugal is the port wine, the wine takes its name from the city of Porto. The Historic Centre of Porto gained the status as a UNESCO World Heritage in 1996.