Palaces and Parks of Potsdam and Berlin

Palaces and Parks of Potsdam and Berlin: Potsdam was the Royal Seat of the Brandenburg-Prussian rulers. Architects and artists created an ensemble of palaces, churches, gardens and parks in Berlin and Potsdam, Germany. Some of the monuments in Potsdam: Sanssouci Park is a complex of palaces and gardens in Potsdam, built under King Frederick the Great during the 18th century. Sanssouci Palace was built for King Frederick the Great between 1745-1747. Sanssouci Palace is often considered the German rival to Versailles, but it is far smaller. The Neues Palais (New Palace) was built under King Frederick the Great from 1763-1769. The Neues Palais was not the principal residence of King Frederick the Great, he used the Neues Palais for the reception of important royals and dignitaries, Frederick the Great lived in his favorite palace Sanssouci. The Chinese House is a garden pavilion built in Rococo style. The Chinese House is located near Sanssouci Palace and the Neues Palais in Sanssouci Park. In 1845-1848, the Church of Peace was built in Sanssouci Park. The Church of Peace houses the imposing Mausoleum of Kaiser Friedrich III and his wife Kaiserin Victoria. The Cecilienhof was built between 1914-1917, the palace was created in the style of an English country house. The Cecilienhof was used during the Potsdam Conference in 1945. The Russian Colony Alexandrowka was built in 1826-1827 to accommodate Russian musicians. The Russian Orthodox Alexander Nevsky Church was built between 1826-1829, especially for the Russian musicians (prisoners of war). Besides the Palaces and Parks of Potsdam and Berlin, there are another two UNESCO World Heritage Sites in Berlin: the Berlin Modernism Housing Estates and the Museumsinsel (Museum Island), Berlin. The Palaces and Parks of Potsdam and Berlin were declared a UNESCO World Heritage in 1990. 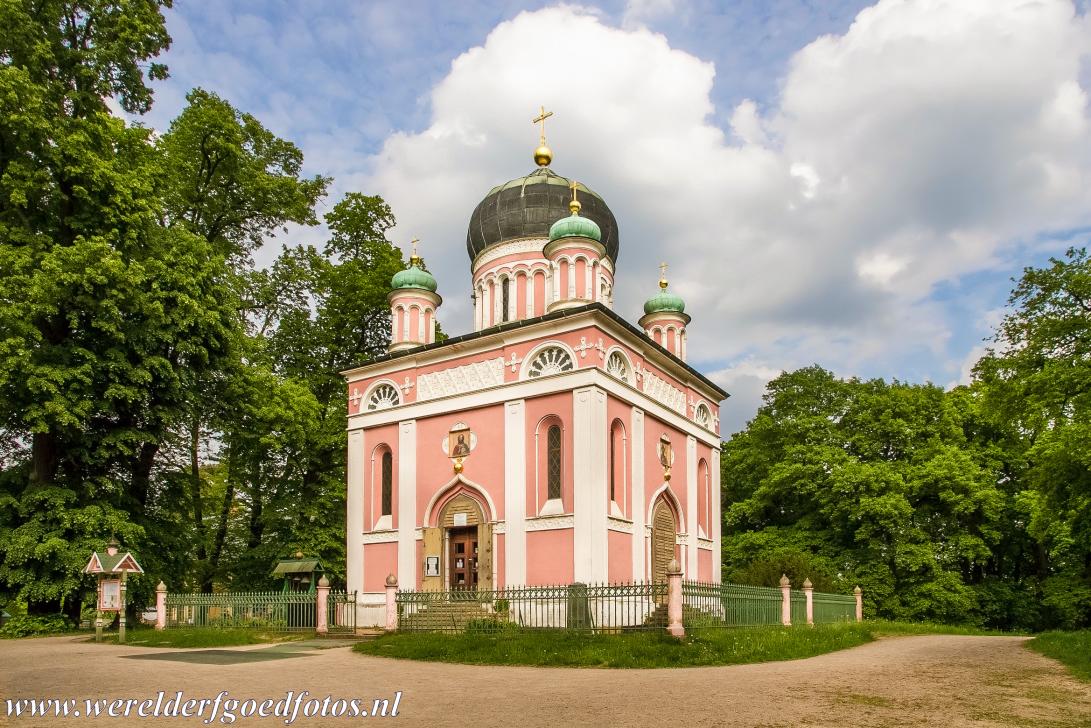