Historic Centre of Urbino: Urbino is a walled medieval hill town in Italy. During the Renaissance, Urbino rivaled the cities of Florence and Siena as a centre of art and culture. The small town of Urbino has preserved its Renaissance appearance. In the 15th century, Urbino attracted some of the most outstanding artists of the Renaissance. The Renaissance culture developed under the rule of Duke Frederico da Montefeltro. The most important building in Urbino is the Palazzo Ducale, the Doge's Palace, built for Duke Federico da Montefeltro between 1444 and 1482. Now, the Doge's Palace is used as the Galleria Nazionale delle Marche, the museum houses works of art by the most famous Renaissanc painters such as Botticelli and Rafaël. The Renaissance artist Raphael was born in Urbino in 1483. Raphael's birth house is a museum dedicated to the artist. Several oratories are scattered all over the historic centre of Urbino. The oratories are adorned with frescoes from the 14th, 15th and 16th centuries. The 14th century Oratory of St. John the Baptist is an important example of the International Gothic style, it is adorned with 15th century frescoes. Some other important Renaissance cities in Italy are Ferrara, Florence and Siena. The historic centre of Urbino was declared a UNESCO World Heritage in 1998. 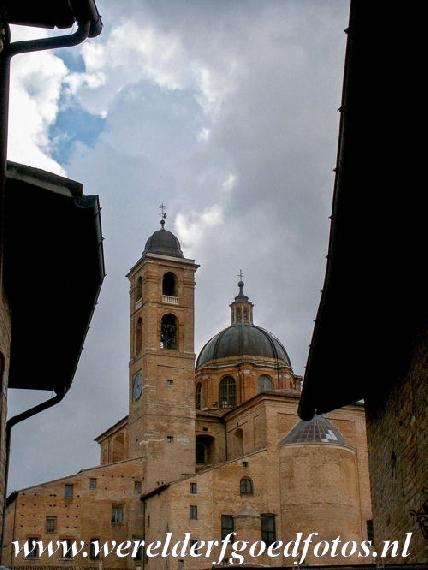