Historic Centre of Siena: Siena is a small medieval town in Tuscany, it is situated about 40 km from San Gimignano and about 70 km from Florence. Florence was the major rival of Siena in the 13th century. Siena preserved its medieval architecture including the town walls and its city gates. The Piazza del Campo is one of the most beautiful town squares in Europe. The Piazza del Campo in Siena is used for the famous horse race in Italy, Il Palio. The famous Fonte Gaia, the Gaia Fountain, is situated on the Piazza del Campo. The 102 metres high Mangia Tower was built between 1338 and 1348. The top of the Mangia Tower offers breathtaking views over Siena and the surrounding landscape of Tuscany. The historic centre of Siena is dominated by the Siena Cathedral. The cathedral was built in 1215-1263 and constructed of blackish-green and white marble, the symbolic colours of Siena. The Siena Cathedral has an inlaid mosaic floor, the She-Wolf of Siena is among the oldest mosaics in the cathedral. The She-Wolf is the symbol of the Siena. The Historic Centre of Siena gained the status as a UNESCO World Heritage in 1995. 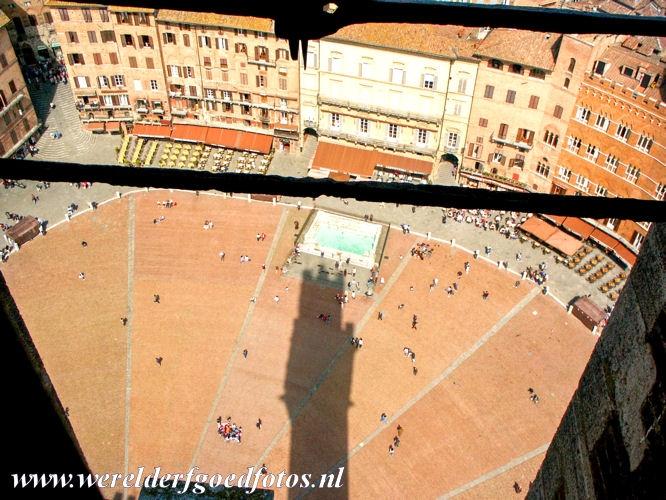